We at Little Redstone often get asked by our clients about the different options available to them when adding or updating a fireplace in their home. Questions such as; What options do I have? What’s the difference between each? Is one more efficient? What about those long skinny ones I’ve seen before? We don’t blame anyone for being overwhelmed by the possibilities at first! Allow us to briefly break it down for you in this fireplace primer!

There are 3 major types to consider between when choosing a fireplace for your home build or renovation – briefly summarized here for quick reference with a chart, but please read on for the full scoop on each! 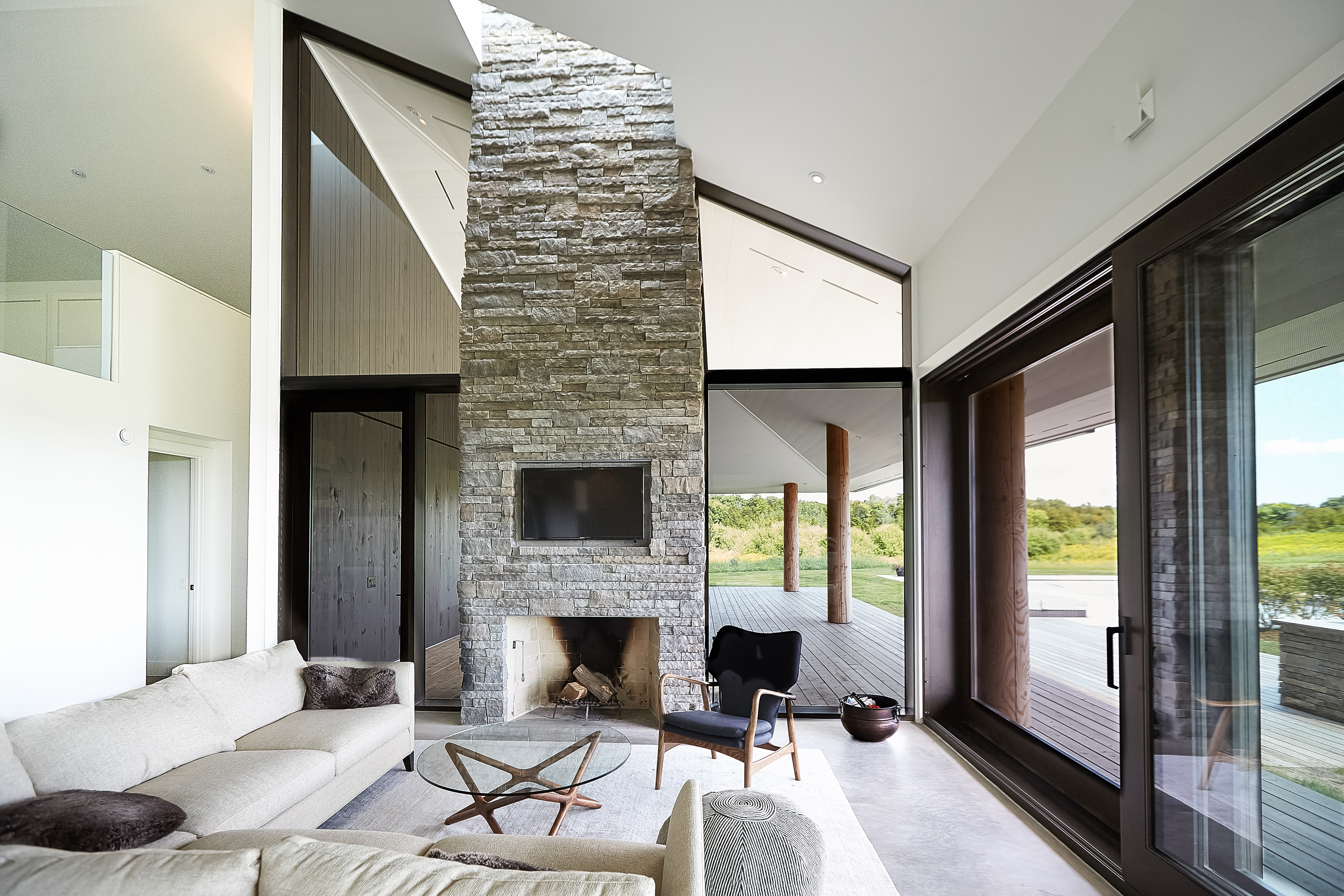 Traditional fireplaces go back throughout human history across many eras and cultures, essentially functioning as a safe way to keep a fire running for warmth, cooking, or other utility. The design one would typically think of, with a square in-wall firebox and a chimney, originated in Europe in roughly the 11th century, however the version most commonly seen today having its origins in the 18th century and features various improvements over the original.  The modern fireplace is a tried-and-true example of form following function – a fire-resistant firebox insert, a decorative surround, and a chimney to vent the smoke out of the living area.
Toronto’s European architectural influences and freezing temperatures make traditional fireplaces a commonly found feature in heritage homes throughout the city. We often have clients ask us, “Should we switch to a gas or electric fireplace instead? We hardly use it because of the work!” It’s true, traditional fireplaces do have increased maintenance needs over more modern innovations, requiring physical fuel such as firewood, and call for annual cleaning and inspections. There is also the environmental consideration, as traditional fireplaces are less heat efficient and produce more emissions than newer fireplace technology such as gas. However, can anything beat the appeal of hearing the crackling sound and smelling the earthy burning of wood, and enjoying that ambiance and warmth as has been done for generations? Well, many would argue that yes, something certainly can! 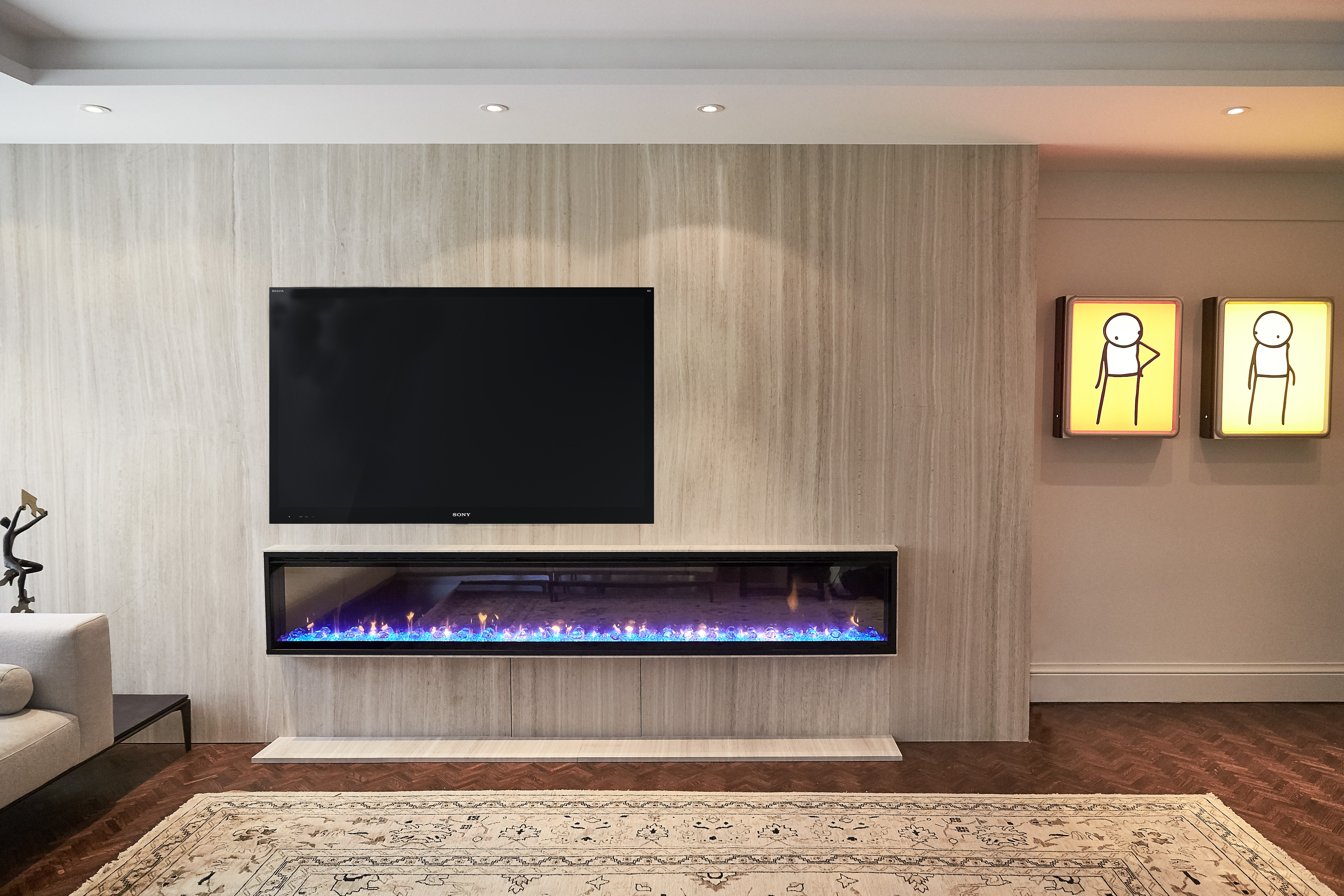 Gas fireplaces, a modern technological update to the traditional fireplace, offer a number of advancements for the modern family focusing on improved convenience and efficiency. Gas fireplaces use natural gas as the fuel source, just the same as a gas stove-top – meaning that the flame is just as quickly adjustable as a stove-top flame would be. Usually, gas fireplaces are turned on or off with just a button – no fanning to get it going, or waiting for it to die out! Additionally, gas fireplaces can take on many shapes and sizes, from looking just like the traditional insert-and-surround fireplace mentioned previously to ultra contemporary linear or two-sided fireplaces. And to top it off, they have improved energy efficiency as almost all of the fuel is turned into energy, and they produce fewer emissions than a traditional fireplace. As for venting, a vent out of the house through a wall is all you need – no chimney required! Gas fireplaces are a great compromise between convenience and ambiance, as they still burn real flames – unlike the third major category, electric fireplaces.

Electric fireplaces, the most recently developed of the three types, is an ever improving innovative type of fireplaces that are only growing in technical prowess and popularity as time goes on. Electric fireplaces, as the name would imply, use only electricity as their fuel source, and little of it – they don’t burn any real flame at all! These electric illusions are a great choice for homes that lack both a chimney and a gas line, and make a great choice for families with young children or very curious pets to whom a burning fireplace could pose a risk of injury. Early electric fireplaces may have looked like unconvincing Halloween decorations, but oh how far they’ve come! There are options available now that produce heat and sound that would have even the most cynical observer convinced it was the real thing.  They come in many shapes and sizes, but usually will be some variation of glass box with a black bezel like you might see on a phone screen. The convenience of being able to add a stunning fireplace to your home when you thought you’d never have one due to a lack of chimney or gas has made these a popular choice, but they aren’t without their downsides. The amount of heat they produce, while extremely energy efficient, is much less than a traditional or gas fireplace would be capable of. And sticklers for authenticity might be off-put by the lack of real flame, though for others, this would in fact be a selling point!

There’s so much variety in personal tastes and family needs that there’s a fireplace right for everyone. No matter your budget or existing home conditions, Little Redstone can consult with you, settle on your priorities, and find the right fireplace for your lifestyle and aesthetics.